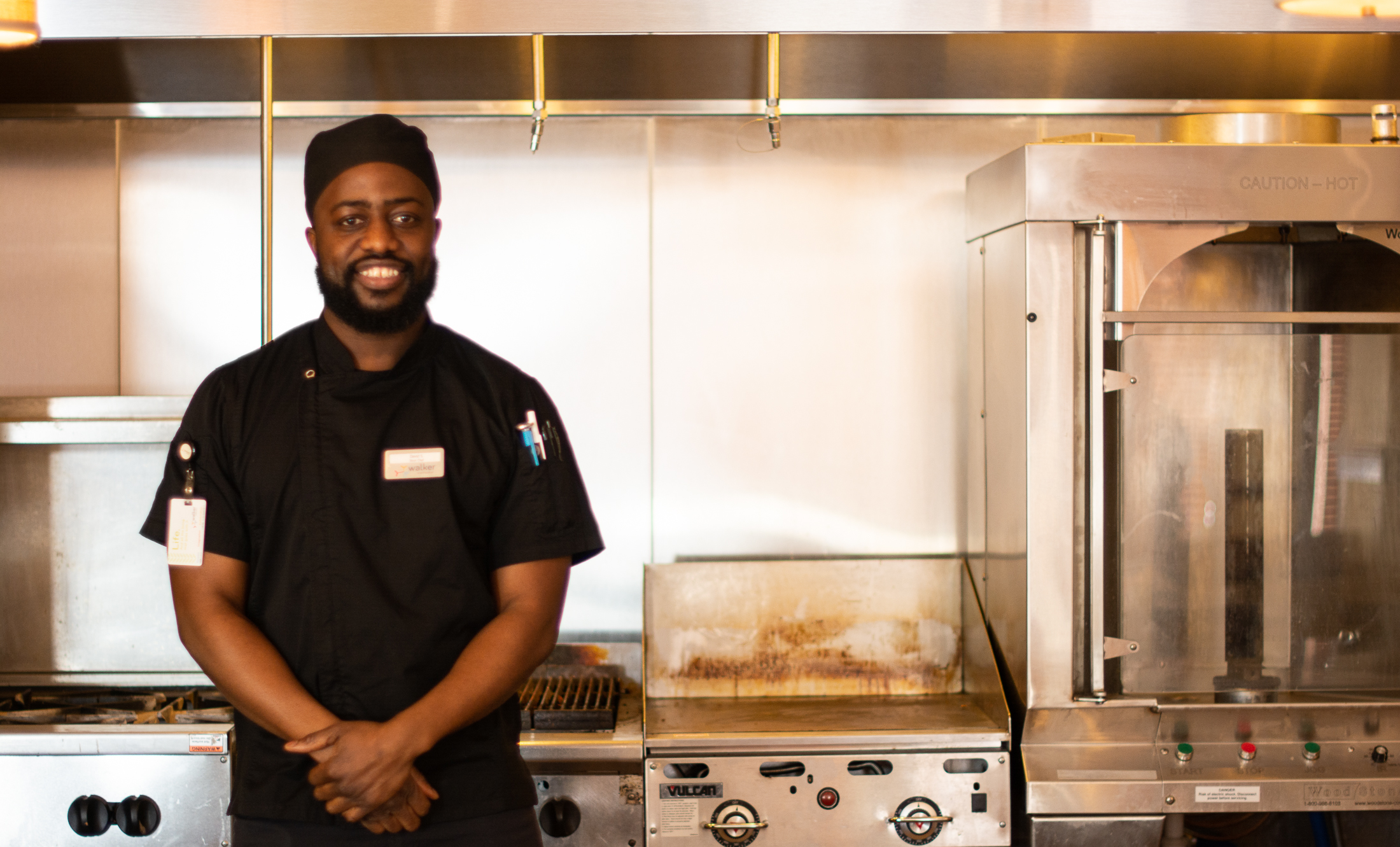 When he moved to the United States from Sierra Leone at 12 years old, David quickly became an expert at adapting to new environments. So, when he tried pancakes at Perkins for the first time, David decided to learn to cook at home. “When I started cooking,” David explained, “I fell in love with it.”

David applied the same strategy he used to learn English to cooking: he taught himself. With lots of practice and the help of a Le Cordon Bleu handbook, he landed his first job at Walker Methodist as a server but didn’t stop there. David’s only been working at Westwood Ridge for seven years but was promoted to prep cook and then sous chef, his current role.

David helps hire team members, creates menus, works with other supervisors, and prepares and cooks meals for residents. He also organized Westwood Ridge’s holiday party in 2019. His favorite part of his job, though, is forming meaningful connections and creating relationships.

For example, when a resident shared her frustrations through emails, David met with her to listen. He learned she was new to the community and related to the struggles of being in an unfamiliar place, answering her questions thoughtfully. David said, “She really just wanted someone to talk to, and that builds trust.” The next week, the culinary team received encouragements instead of complaints.

Overcoming challenges in his own life helps David understand the causes behind effects, and he looks for ways to give back. So, when one of his servers consistently arrived late for shifts, David learned they didn’t have reliable transportation. Using advice he received from his own supervisor years ago, David taught the server about building credit and buying a car.

Always eager to grow, David applied for Walker Methodist’s leadership development program and graduated in 2019. Throughout the year-long program, he improved his skills, learned how to address problems, and become a role model to other team members. “I wanted to make an impact,” he said, “and my mentor helped me understand the next steps to reaching my goals.” His mentor, also part of the culinary team, taught David how to better understand expectations, handle teams, and take responsibility.

Now, as a team leader, David strives to implement what he learned in the leadership development program. Through one-on-one meetings with those he supervises, David recognizes their successes and encourages them to grow. “Walker provides many areas for growth,” he said, and his family (including his parents still in Sierra Leone) encourages him to pursue his dreams.

Currently, David is completing his degree from North Dakota State University to become a Certified Dietary Manager. He knows faith and the kindness of others, plus a lot of hard work, can go a long way. “Know what you want to do and have a purpose,” David said. “It’s a process, but with growth—anything—is possible.”