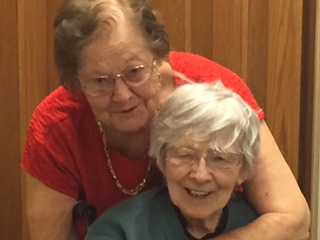 Despite its inevitability, it has been said that aging is the one thing that seems to catch all of us by surprise. At Walker Methodist, we believe in the fullness of life. Our mission statement is accompanied by supporting values of respect, imagination, and collaboration.

We work hard to make life in various Walker Methodist senior living communities as easy, enjoyable, and carefree as possible. We are committed to ensuring that each resident truly feels at home and is able to engage in activities that leave them happy and fulfilled. From time to time, we have the opportunity to be part of special moments and conversations shared between residents, families, and friends.

Evalyn was beaming from ear to ear as she embraced Millie in a hug. It was clear this was a strong, lifelong friendship. At a table set with china and linens, sat a pot of hot coffee and a delicious, hot meal, two friends shared a special afternoon together.

Millie and Evalyn met at the VA Hospital about 60 years ago, where Millie's husband Mel was in the ICU and Evalyn was a volunteer. Evalyn was allowed into Mel's room, but Millie - his wife - only got to see him for about 10 minutes at a time. Evalyn would stay and talk to Millie to comfort her and they became friends.

After Mel was discharged, they discovered they both belonged to the same VFW Post in Bloomington and often met there with their husbands. Millie and Evalyn later worked together at Montgomery Wards, where Millie was the head of the jewelry department and Evalyn worked in lingerie. They share laughs and memories about old co-workers and friends.

Among those stories was talk of an old friend, Virginia. They remember her selling her home, and deciding to move into a senior living community. At the time, Evalyn had heard about Walker Methodist and recommended that her friend visit Highview Hills. In later years, Millie then chose Walker Methodist Health Center based on Evalyn's advice. Evalyn's second husband stayed at the Care Suites briefly before he passed, and she appreciated the care and attention he received.

In years past, both Evalyn and Millie have traveled extensively. In conversation, we learned that Millie’s parents came here from Sweden, and met in Massachusetts before moving to North Dakota together. Millie still speaks some Swedish herself.

Evalyn shared stories of her first husband, Julian, passed away at the young age of 49. Later, Evalyn married Jack – her 2nd husband who stayed at Health Center. Millie told Evalyn, “You’re a lucky girl. You had two wonderful husbands.” Evalyn insisted the Millie’s husband Mel (the man in the VA hospital) was as sweet and “good-natured” as could be, and they too were a very happy couple.

Those who know Millie see how patient and uncomplaining she is, and Evalyn insisted she has always been this way. Evalyn describes herself as a “feisty Irish girl” and “not nearly as sweet as Millie”. They clearly adore each other and seeing them connect and continually enjoy their friendship was a delight and pleasure for all.

A special ‘thank you’ goes out to Walker Methodist staff members and residents, Brooke, Brittany, Cathy, Claudia, Mary, Irvin, Jack, Ubah, and others involved in this spectacular little reunion of friends. Thank you also to Anne T. for making this all happen and to Walker Methodist Care Suites for their involvement. It was very special to both Evalyn and Millie, and touching for those of us who had the privilege of witnessing it.

These life-long friends are able to reunite in the Walker Methodist community thanks to staff members who work to find time for them to meet and arrange a comfortable environment.

I am an accomplished professional with experience in the senior, hospitality, sales, and marketing industries. My success has included individual and multi-property operations, sales, and marketing and includes brand management. My career has included increasing levels of responsibility currently as the Regional Director of Sales and Marketing for Walker Methodist. In this role my responsibilities include the growth and implementation of Walker's sales and marketing strategies. Support and facilitate development and implementation of Walker's marketing plan, working with Senior Leadership and community Directors. Develop sales and marketing strategies based on the market place and the community and property needs. Plan and administer Marketing's operating budget.